The Abolition 2000 Youth Network is a working group within Abolition 2000 which provides a forum for networking and building cooperation between various youth-led nuclear disarmament initiatives, and with youth working on other related issues or peace and sustainable development. The youth network is aimed to educate and engage young people, supporting intergenerational dialogue by providing opportunities to participate in peace and disarmament activities locally and globally. One of these global activities is an opportunity to join the Nuclear Non-Proliferation Treaty (NPT) Preparatory Committees (PrepCom) and Review Conference, which take place every 5 years.

The NPT is a multilateral agreement that consists of 3 main pillars and is aimed to prevent the spread of nuclear weapons and weapons technology, promote cooperation in the peaceful uses of nuclear energy and further the goal of achieving nuclear disarmament. The Treaty was adopted in 1968 and entered into force in 1970. 191 States, commonly referred to as States Parties, joined the Treaty. This year marks the 50th anniversary since the entry into force of the Treaty, however the 2020 Review Conference was postponed and scheduled to take place next year due to COVID-19.

The 2019 Preparatory Committee for the 2020 NPT Review Conference was held at the United Nations Headquarters in New York City from April 29 to May 10. The meetings gathered a diverse range of diplomats, parliamentarians, mayors, representatives of academia and civil society, including youth organisations and delegations of young people, coming from around the world. They convene at the United Nations for intense deliberations to discuss the progress of the Treaty commitments and obligations to be fulfilled by the States Parties, agree on consensus document and advance nuclear disarmament.

During the official meetings of the NPT Preparatory Committee, civil society representatives have the opportunity to observe and contribute to the discussions at designated time slots and also to organise side-events. One of the side-events was organised jointly by youth organisations such as the Peaceworkshop Mutlangen, Abolition 2000 Youth Network, and the German Peace Society represented by the youth delegates mentioned below, including two more team members who helped arrange the event – Yerrasyl Kalikhan and Aray Serikzhanova from Kazakhstan.

The side-event titled “Young people acting together for disarmament and peace education” took place on 3rd of May 2019 in the format of an interactive discussion. It was chaired and moderated by Arailym Kubayeva (Peaceworkshop Mutlangen), who presented the introductory remarks on peace and disarmament education. It also included the following speakers: Carlos Cruz (CTBTO Youth Group – CYG) – on being an active member of the CYG and promoting the entry into force of the CTBT, Marzhan Nurzhan (Abolition 2000 Youth Network) – on being a convener of global youth network and collaboration with different actors in disarmament fora, Shelby Surdyk (Veterans for Peace) – on organising Alaska youth congress on global elimination of nuclear weapons for high school students to be held in 2021 (initially planned in 2020). During the Q&A session, more discussions were brought forth regarding the distinction between peace and disarmament education, the importance of the intergenerational dialogue and the manner in which youth can be empowered twofold: through the knowledge and experience passed by senior representatives, so-called “nuclear veterans”, but also via peer-dialogue based on the exchange of experiences and information among young people coming from different geographical locations providing equal access for opportunities and equal voice to express and to be heard.

During the NPT PrepCom, being a member of the international youth delegation means having the opportunity to:

Peaceworkshop Mutlangen and Abolition 2000 Youth Network form international delegation for the next NPT Review Conference in 2021 (TBC) and welcome new members. Please follow us on Instagram and Facebook and contact to join as participant for the next Youth Network delegation by sending email to the Peaceworkshop a.kubayeva@gmail.com  or Abolition 2000 secretariat@abolition2000.org

Testimonies from the delegates from Kazakhstan

“Taking part in the Preparatory Committee for the 2020 Review Conference of the Parties to the Treaty on the Non-Proliferation of Nuclear Weapons in New York City has been a great experience. There are a number of points I would like to mention that anyone should try doing if the chance comes up. Attending the conference has been about having this opportunity to enter the conference in the UN as a part of Kazakhstan delegation, that was so empowering. Meeting new people from all over the world and getting so many insights on the topic of nuclear weapons that is just priceless. While the conference took a huge part of this trip, staying at the NYC was also a breathtaking experience. All in all, this is something I would recommend for anyone who has an interest in the topic and dreamed about going to NY.”  – Aray Serikzhanova

“It was really enlightening to participate in the third session of the Preparatory Committee for the 2020 Review Conference of the Parties to the Treaty on the Non-Proliferation of Nuclear Weapons conference at the UN headquarters. I got to learn more about different countries‘ perspectives on the issue directly, sitting in the same room as representatives of countries were reading their respective statements. Diplomats from Kazakhstan’s Mission to the UN invited Kazakh NGO representatives to have a more informal talk in the Delegates Lounge. Having a frank discussion about both the internal and foreign policies of Kazakhstan on nuclear developments was full of insights. Participating in the event, also quite importantly allowed me to meet representatives of different non-governmental organizations that tirelessly work on the cause of nuclear non-proliferation. Few youth members and I were invited to have lunch with Beatrice Fihn, executive director of the International Campaign to Abolish Nuclear Weapons (ICAN) in an unofficial setting. Overall, it was an excellent experience of learning, networking, and sharing.” – Yerassyl Kalikhan 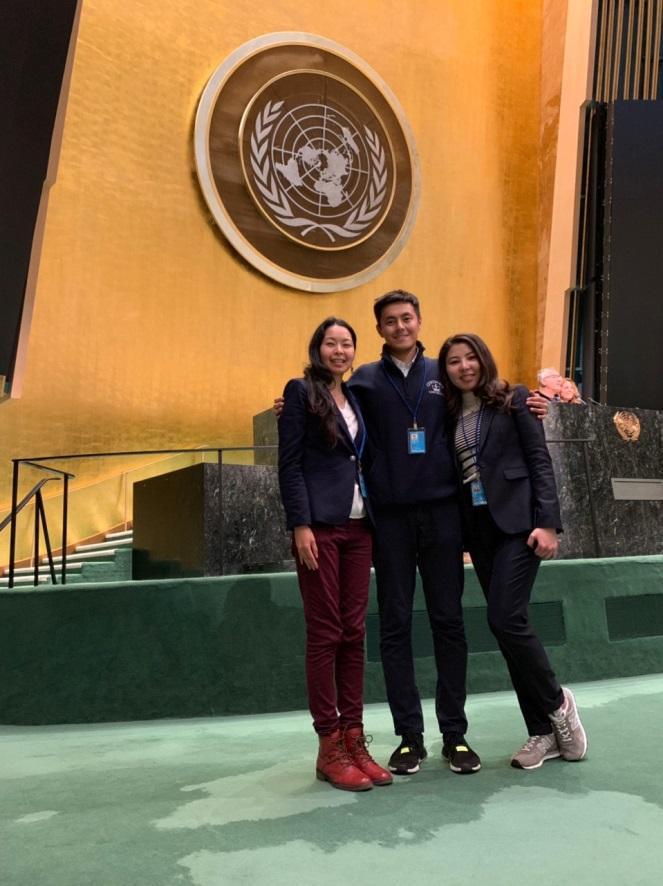 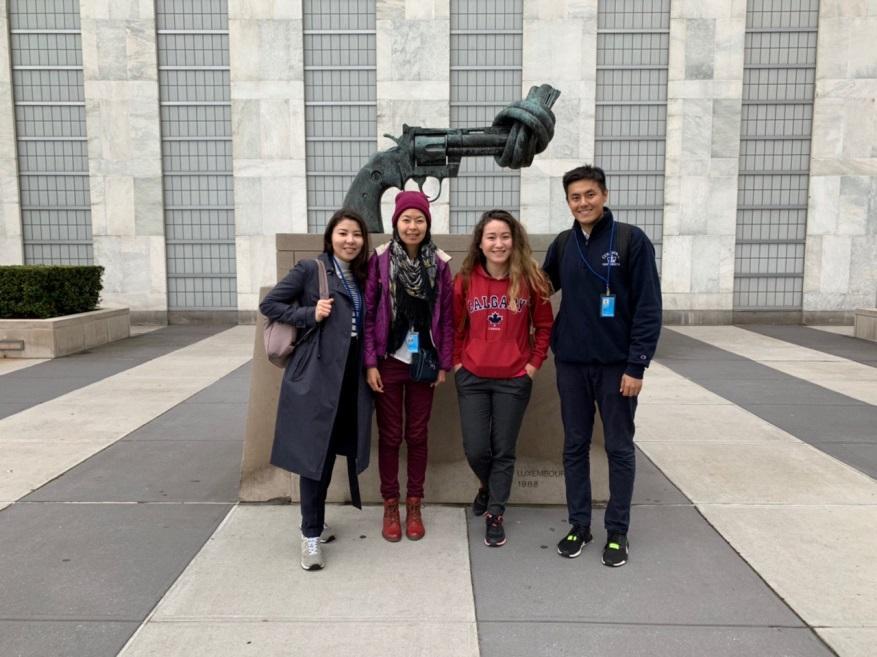